by Gratus.eth
in Technology
Reading Time: 5 mins read
1 0
A A
Donate
0

The Merge is coming, and it marks a pivotal moment for Ethereum, Sharding, TPS, ENS and Web3.

According to Ethereum.org, the Merge is currently forecast to ship this year, in Q3-to-Q4 2022. The move from “Proof-of-Work” (POW) to “Proof-of-Stake” (POS) will reduce Ethereum’s carbon footprint, significantly, with a “reduction of energy consumption” at an estimated decrease of 99.95%.

The whole process for “The Merge” is in its final stages, where core developers are involved with final public testnets and reviews, before moving onto mainnet launch. Once the merge takes place, the current “execution layer” will have merged with the new POS consensus layer, known as the “Beacon Chain”.

The Merge sets the stage for “Sharding”. Sharding is a technology that (when fully implemented) is projected to lead to an increased Transactions-Per-Second (TPS) of 100,000/second, which is a staggering increase relative to the current capacity.

Data from Etherscan shows Ethereum currently has a maximum of around 1.5m transactions per day, which equates to around ~17 transactions per second.  This is a huge limitation that flows from the current Proof-of-Work design architecture.

Ethereum is not the only player in this field, there are many other smart contract platforms, some of them either currently with a domain name system or planning one in the future.

Ethereum however has the first mover advantage, both in terms of being the first major smart contract platform and the first to successfully introduce blockchain domain names (in May 2017, with the creation of the Ethereum Name Service (ENS)).

Searches on Google trends show that searches for “ENS Domains” have accelerated since January 2021, and are now on a par with searches for “DNS Domains”. The movement is clear, and the first mover advantage is real. Recent high-value sales of ENS domains such as 000.eth for 300 ETH underline the growth of ENS domains increases with Ethereum’s EMV technology in this space with investors.

The addressable market for ENS domains is truly globally, likely several orders of magnitude beyond the sales we have seen, or the current 2 MM ENS domains created. The merge is a key moment setting the stage for ENS to continue this acceleration within the domain name marketplace and will enable it to secure significant market share within the Web3 domains market.

ENS is the Swiss army knife of crypto, enabling multiple functions beyond simple transactions, not only for Ethereum but also for Bitcoin and a large array of cryptocurrencies on the market. With the security and decentralization of Ethereum, the future increase in TPS, and blockchain capacity, ENS can capitalize on its first mover advantage to become the dominant base layer for Web 3.

With more TPS available, and further utility being in production, namely Sign-In with Ethereum (SIWE) (@signinwitheth / login.xyz).  This is a significant innovation within the Web3 space, enabling important functions for users: the ability to sign in to Web3 applications using an Ethereum address and signature, and for a user to control their own digital identity using their Ethereum account linked to their ENS profile. Your ENS name becomes your defacto Web3 login, so you can log in to apps that can retrieve your public data listed on your ENS profile such as your avatar. This creates significant potential for new Web3, and existing Web2, apps-and-services to integrate Sign-In with Ethereum for their users, and with SIWE also comes ENS names.

You can imagine, this will lead to increased demand for ENS Web3 Domains, given most will want an ID representing something other than a long hexadecimal address, ie: “0x4ac52b……”. ENS domains bring new levels of utility to Ethereum, and will onboard millions more users into the ecosystem. As we seen from the transactions chart (Fig. 1), an increased economic activity creates more transactions which is strongly correlated to an increase in the value of Ethereum. With the growth of ENS web3 domains, the stage is set for a reflexive-dynamic to develop between ENS as a utility within the Ethereum ecosystem, and the growth of Ethereum as a network, with each reinforcing the other as the market develops and expands further.

We do not know how The Merge will effect the price of ETH. It could go up or down short term, and we do not know what will happen long term. It could be a “sell the news” event, or it may be the start of a FOMO bull run. We have theories about the general ideas and momentums.

In a post-Merge sharding world, an Ethereum with increased TPS can usher in this new Web3 world globally, and with daily transactions in the multi-million bracket, it is highly probable this will lead to an increase in the value of the Ethereum network, its native token Ether, and for the ENS protocol to continue to lead the Web3 domains market.

The following chart (Fig. 1) is a plot of the Ether-price on the vertical-axis, versus daily-transactions on the horizontal-axis. This chart contains all data, from the inception of Ethereum until 26th July 2022. 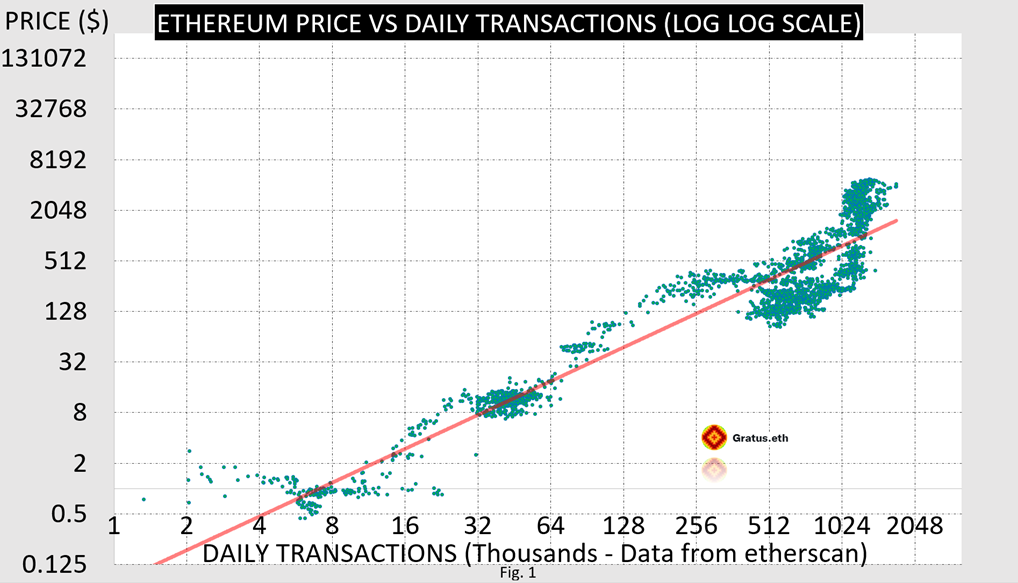 The more economic activity taking place on Ethereum (measured by daily transactions) equals more market value for the native currency of the network, Ether. The following chart (Fig. 2) is an expanded version of the earlier chart, to consider (scale represents millions of transactions), showing where the Ether price could be headed, in a world with tens of millions of daily transactions. 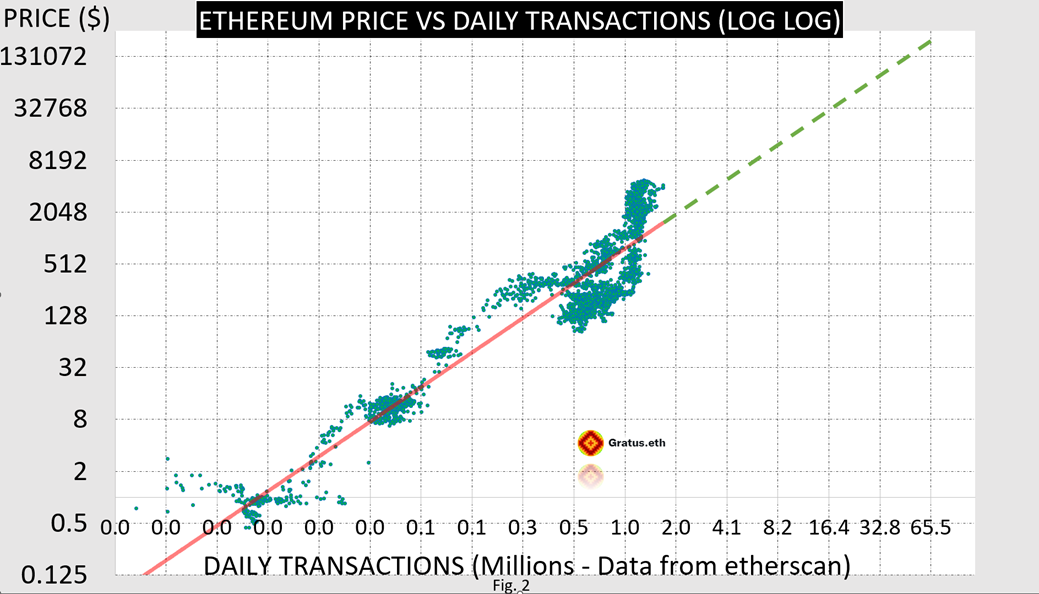 Signing off, I’ll leave you with a word of caution. Always do your own research. There is a lot of volatility, and time in the market is always better than timing the market. Reference my articles, and let me know if you have any questions, either via the comments below, or via Twitter. It is important we all understand these pieces!

Gratus.eth is a Crypto investor (since 2014), an analyst, and writer. He writes about crypto and trends in Web3, while including unique research and analysis. Gratus.eth believes Ethereum will be the foundational layer for Web3 and decentralized identity will be one of the first killer apps.

How to Register an Underscore ENS Domain