by CryptoReporter.eth
in Culture, Interviews
Reading Time: 6 mins read
1 0
A A
Donate
0

The following is an Interview with @KevforKing (AKA: 5159.eth) of the ENS Updates Show.

The ENS Updates show is a Twitter space held from 11:00 am to ~12:30 pm, Eastern Time, that goes in-depth explaining the latest developments in ENS.

Since Kev first started his show back in April, it has grown exponentially and evolved into a podcast series sponsored by the ENS Maxis and DomainPlug.

In the discussion, we dive into the history behind the ENS Updates show, what key factors he believes have made the show successful, and what are Kev plans ‘to take the show’ in the future. 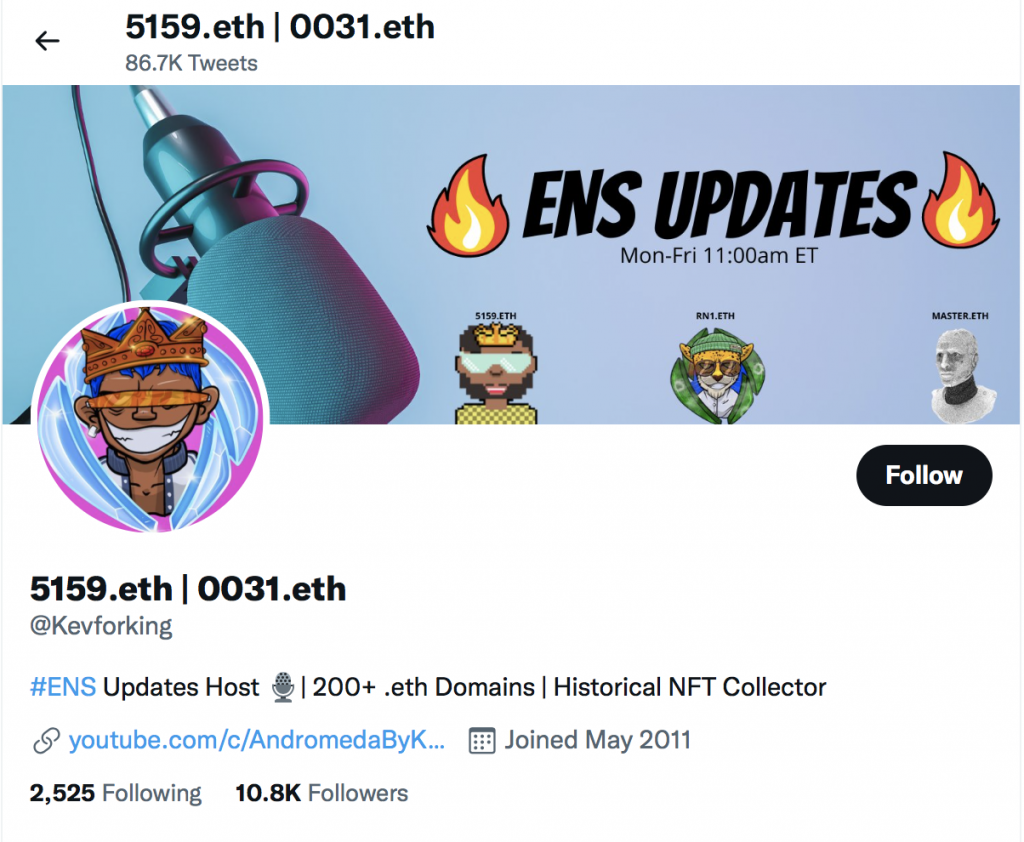 Cryptoreporter.eth : So can you tell us a little bit about yourself?

I consider myself a futurist in a sense. I’m fascinated with the ideas and the thought of what humanity will be in twenty years, fifty years, and a hundred years. I’m almost a little jealous that I don’t get to live in the world a hundred years from now because I just think it’ll be so much more advanced and so much cooler than the world we are living in now.

CryptoReporter.eth: What was the first time you heard about crypto?

Kev: First time I heard about crypto was when I was a junior in college, during the 2017-2018 bull run. I invested $300 in Bitcoin and Ethereum with a college refund check. I made some money, but never took any profits. I thought the market will go up forever. Bitcoin peaked at $20,000 and it just fell to $3000. That was an interesting time.

CryptoReporter.eth : What was your first experience with ENS?

Kev: I began to learn about ENS right before the airdrop, which was around 2021. I took a deep dive into ENS and I was ready to register my Twitter handle (@kevforking). It so happens that the gas was through the roof on that day, and it was going to cost me a hundred dollars to register that name. So I said “screw that, I’m not gonna do that” and just kept going about my day.

A week later, ENS announced the airdrop, and I didn’t get anything. The entire Twitter was talking about the airdrop. It seems that everyone just made a fortune, and everyone was investing back into ENS. That’s when I was like, okay, I have to take this thing seriously. I started learning a little more about it and finally registered my name.

.eth will be so much bigger than .com

CryptoReporter.eth: How did you come up with the idea for the ENS Updates Show?

Kev: Initially I came up with the idea because I had a YouTube channel where I was interviewing people in the NFT space and, I wanted to learn more about ENS.

I asked @Bishara if he would be interested in doing an interview show with me on Twitter Spaces. We started once or twice a week, by bouncing ideas off each other and sharing our perspectives on ENS, as well as ENS investment opportunities.

Once the four-digit and three-digit craze happened, that’s when all the eyes were on ENS. Our episodes were reaching 500 listeners,  and at their highest, we had close to 1000 listeners on the show.

We moved to doing daily shows, and we were reaching a lot of people, but the shows were too long – some reaching 5hrs. This went on for a few weeks before I realized that it wasn’t sustainable.

I needed to create more structure.  So we got consistent hosts and co-hosts and capped the show at 1.5hrs, and it took off from there.

Kev: It is amazing. It’s a dream come true. I always had visions of being a host and having my podcast. I think I’m getting to live out my purpose and fulfill what I was placed on this earth to do. I study the greats – Oprah Winfrey, Larry King, and Joe Rogan.  I’m constantly listening to podcasts and improving my craft.

But what makes it extremely special is the people I get to do it with: Ron, Master, Thenftverse, 3402, and ENSPUNKS. That’s what makes it great to me. It’s getting to be able to provide value and onboard more people into the world of Web3. And I get to do it while loving every second of it.

I know I get a lot of the credit for the show, but I wonder where would the show be without GaryPalmerJr,  Ron,  Master, and NFTverse? So I’m grateful to everyone who supports it.

CryptoReporter.eth: What are some factors you believe made the ENS Updates show Successful?

Kev: I think all the hosts, co-hosts, and speakers, the different dynamics, the education, and the entertainment we have on the show make it successful. Ron brings a unique perspective to the show as an early “.com” investor,  Master is an early ENS investor, Gary is extremely technical and has been involved in ENS since the very beginning, NFTverse is a futurist, and ENSPunk is an attorney.

I think the real reason the show is successful is the fact that it’s an open community forum. I think the openness of the community makes every episode different and unique in its own way. If you join the show, you’ll always be up to date on what’s going on in the ENS space, you will make new friends, and you will feel like a part of a community.

CryptoReporter.eth: Are there any future plans for the show?

Kev:  My goal is to reach over 1000 listeners/show. I will continue to bring on phenomenal speakers and create a platform for the community to come together and discuss ENS. And one day if there’s an ENS conference, we’ll host a live version of the show.

CryptoReporter.eth: Is there anything you want to say to your fans?

Kev:  If you believe that Web3 is here to stay, then it’s almost impossible for the ENS to fail. Take a second and realize that this is a cutting edge technology that is going to help revolutionize the world.

Take a look at Meta, Twitter, and Reddit. They all integrated NFTs within their platform. Soon, every major business, every small business, and every mom-and-pop shop will be using blockchain technology.

If you believe that in the future everybody will be using blockchain technology, then you understand that it all starts with digital identity. So invest in ENS, and join our community!

So You Just Found Out About ENS?!