by Shash Pyakuryal
in Culture
Reading Time: 30 mins read
2 0
A A
Donate
0

If you‘re like me, you‘re immediately skeptical when you hear “anonymous sources“ on the news. But what if you could be a credible anonymous source, without worrying about censorship?

That‘s where Ethereum Naming Service comes in. Now, which is more dangerous: wikileaks.org or wikileaks.eth? ENS is a new way of managing digital identities. It’s decentralized, meaning that there’s no central authority controlling it. That means it’s more secure and private than traditional methods.

I am not advocating a political ideology nor am I objecting to any. Also, I am not encouraging anyone to break the law. Please obey the law. I consider this to be one of my most important pieces of writing and I ask that you read this more than once.

Wikileaks was created in 2006. In 2010 they made their mark on the world by releasing highly incriminating evidence of war crimes and incompetence on the part of the Bush Administration and to a lesser extent the Obama Administration in Iraq and Afghanistan. 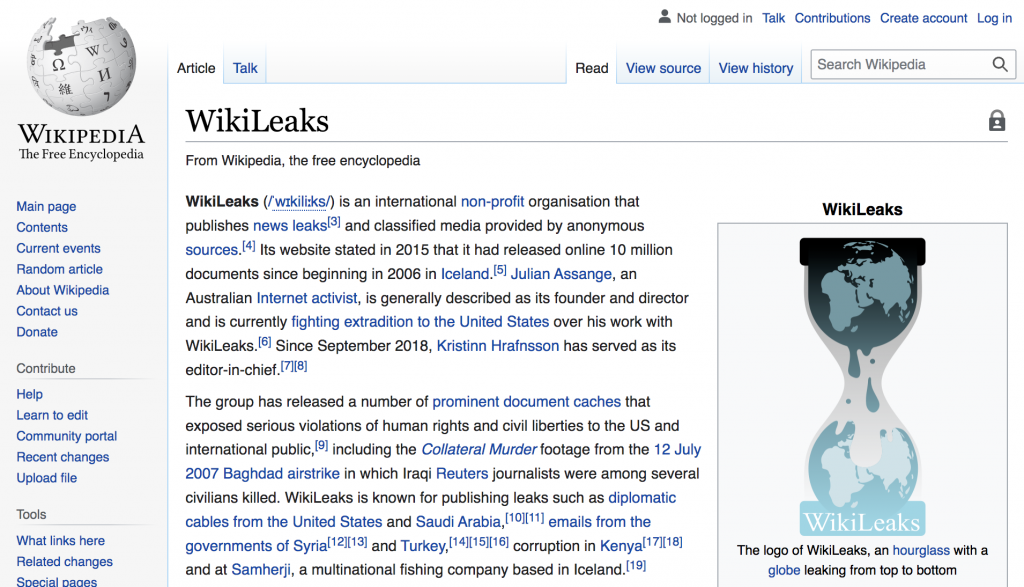 The Iraq and Afghan war logs were a turning point for many Americans. The reality of what was happening on the ground was finally exposed to the public. The US government tried to downplay the severity of the leaks, but they ultimately failed. The damage was done.

It made people question the government‘s narrative and it made Julian Assange, Wikileaks founder, a marked man and a pariah of NATO hegemony.

Julian Assange is currently facing extradition to the United States on charges of conspiracy to commit computer intrusion. If convicted, he could face up to five years in prison.

This brings us to a very important question: If the information released by Wikileaks was true, why doesn’t the public care more?

It comes down to censorship. The role of whistleblowers is to release things, then the incriminated party swoops in and intercepts the documents that were leaked, and instead releases highly redacted versions of said documents, protecting its interests.

Can the full, unredacted documents be released without the fear of government intervention or manipulation?

NFTs, or non–fungible tokens, have been gaining a lot of traction in the world of cryptocurrency. And for good reason, too – they offer a unique and immutable way of storing data on the blockchain. One of the coolest things about NFTs is that they can be used to store all kinds of data – including sensitive or censored information. That’s because once the data is stored on an NFT, it can’t be altered or removed from the blockchain.

So where can people find these uncensored documents? Hypothetically, they would find it on Wikileaks.eth, a site that is dedicated to storing sensitive information on the Ethereum blockchain. The reason why this is so important is that traditional sites like Wikileaks.org can be taken away from the owner due to their inherent architecture.

However, for WikiLeaks.eth it can only be taken from the owner if they use an insecure wallet with exposed seed phrases or forget to renew the domain. This makes NFTs a powerful tool for storing sensitive information that needs to remain accessible to the public, even in the face of censorship.

Ultimately you as the end-user must decide which type of blockchain domain you want to use. For me, I ask myself a few questions: Is this domain entirely in my control? Can anyone get access to this by the laws of the network architecture? Is this protocol scaleable? Is the blockchain network I am using reliable and resilient?

With BNB possibly if they can keep the network from shutting down from time to time. – can we clarify this

For you, the end-user, to understand which blockchain domain is the most powerful, secure, and reliable you must understand it in the context of journalistic freedom.

Who Benefits from Web3 Journalism?

The benefits of Web3 journalism, which is Immutable, are vast and varied. Perhaps the most obvious beneficiaries are civilians who are being lied to by their government. With Web3 journalism, there can be no denying the truth – it is there, in black and white (or whatever color you choose!) for all to see.

Governments also stand to benefit from Web3 journalism. By using this technology, they can expose the secrets of other governments, without fear of retaliation. This could be a powerful tool in the fight against corruption and abuse of power.

Finally, whistleblowers also stand to benefit from Web3 journalism. In a world where whistleblowers are often persecuted, this technology provides a way for them to expose classified documents without fear of retribution. In short, there are many beneficiaries of Web3 journalism. Ultimately, the only people who will be angry with this technology are those who will be negatively affected by it.

Who Does Web3 Journalism Hurt?

Pretend you are a journalist in the future. You have been assigned to write an article about how Web3 journalism is impacting different groups of people. Who does Web3 journalism hurt?

In a world where journalism is immutable, intelligence agencies are at a disadvantage. They can no longer control the flow of information and wage psychological warfare. Media companies that rely on corrupt journalistic practices are also exposed. And finally, banks that are over–leveraged can face bank runs when customers find out the truth.

Journalism and the Use of Anonymous Sources

The main beneficiaries of Web3 journalism will be the media itself. Since all whistleblower leaks can be seen on the blockchain and pointed to an immutable address like wikileaks.eth then there will be less censorship (if the metadata is frozen) and more eyes can scrutinize the documents leaving little for interpretation in case of interception and release of redacted files in a Web2 format.

An anonymous source can be an anonymous person, but their ENS name can be public, the only thing they’d have to do on their end to protect their real name is to use VPNs and other forms of network masking to prevent tracking.

Being anonymous in today’s realm of journalism is not worthy of being considered truthful given how the term has been hijacked to give a false sense of credibility to those who claim to be the monopolists of the truth.

We are in the early days of Web3 and it is hard to say what the future will bring. However, there are a few things that need to happen in order for Web3 journalism to become mainstream. Firstly, we need to be able to upload files faster and also be able to upload larger files.

Right now, the scaling efforts of larger upload sizes aren‘t really there yet, but that is changing every day. Another way journalism can become mainstream in Web3 is by having a big credible player use ENS domains as both an identity and as a decentralized news website. Only time will tell if Web3 journalism will become mainstream, but I am hopeful that it will.

Preserving the Real Purpose of Journalism

The way that we store and share information is changing. The internet has allowed for a level of transparency and freedom when it comes to the sharing of information that was previously unheard of. However, this newfound freedom comes with its own set of challenges.

One of the biggest challenges that we face is that of censorship. As a writer and journalist, I am all too aware of the danger of censorship. I believe that most writers who care about their work fear censorship.

ENS will make blockchain technologies understandable to people and once writers and journalists understand the idea of decentralized file storage and decentralized websites then we will see a new age of ethical journalism and instantaneous validation of credibility that has never been seen before.

If you create a Web3 journalism outlet that allows highly classified documents to be leaked uncensored with the metadata frozen then you are probably an even bigger pariah than Assange and Wikileaks, at least with Wikileaks.org they can control the output of information whereas with WikiLeaks.eth they cannot.

You are seeing social media companies randomly banning accounts and ruining a lot of lives who are dependent on social media for their income and livelihood, with decentralized file storage protocols your leaks, tweets, and videos can be saved on the blockchain and recovered from just about anywhere pending you secure your keys.

If you are an investigative journalist, or even an activist, and you are not using some form of decentralized file storage protocol then you are not doing your job. Your work can be easily censored and taken down, but if it is stored on the blockchain then it is there forever and can never be taken down.

There are a few decentralized file storage protocols out there, but the one that I recommend is IPFS. IPFS is a peer-to-peer hypermedia protocol designed to make the web faster, safer, and more open. IPFS is like a big swarm of bees, and each bee is a node in the network. When you add a file to IPFS, you are adding it to the swarm.

As Web3 becomes more mainstream, the demand for serious and quality projects in the space will grow. Minting NFTs is only going to get the space so far.

Especially during this bear market, the only Web3 projects that have seen growth, liquidity, and scaling have been ENS based.

It’s only a matter of time that the normalization of ENS will bring journalism to the forefront of Web3, and only time will tell if Web3 journalism will take over its current, and highly censored counterpart.

Shashwat Pyakuryal is a writer who focuses on writing non-fiction and fiction, while dabbling into the world of Web3. He has made a name for himself in the ENS space as a writer and commentator.