From Finance, to Bitcoin DeFi, to ENS-and-DNS Crypto Wallet Capabilities on Web3

by CryptoReporter.eth
in Culture, Interviews
Reading Time: 7 mins read
1 0
A A
Donate
0

Sean Murray is the President and chief editor of Debanked, one of the top publishers within the small business finance industry.

He is an early investor in Bitcoin and began his journey into the crypto ecosystem back in 2014. Since then, he has been an active member of the ENS Community and has gone on to create projects like eth.photos to view NFT portfolios of those in Web 3. 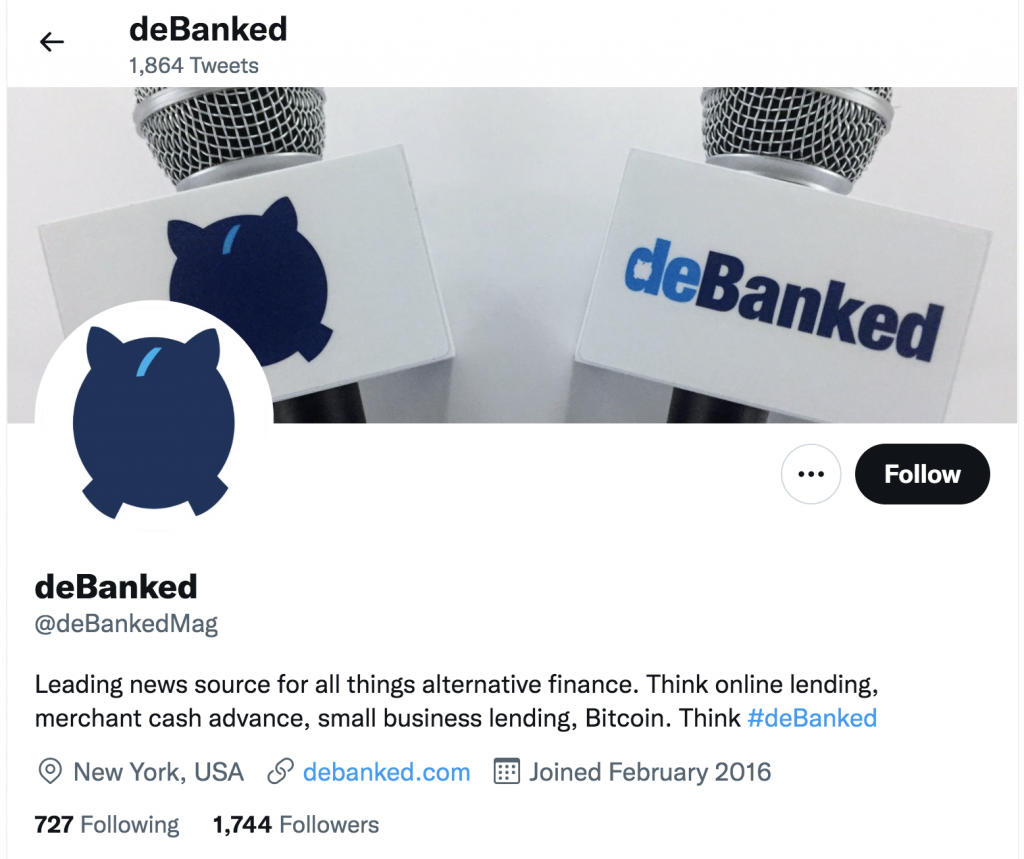 CryptoReporter.eth: So for those who don’t know who is Sean Murray?

Sean Murray: I’m a born and raised New Yorker with a Bachelor’s in Accounting & Finance from the University of Delaware.

One of my first jobs out of college was working for a brand new startup that provided capital to small businesses that didn’t qualify for a bank loan. It was a very new type of finance related to factoring and the target customer was storefront retail and restaurants. I spent a few years in that business as a senior-level underwriter in charge of issuing approvals or declines and a few years on the sales side where I was tasked with pitching the terms and closing the deals.

By the time 2010 rolled around, I had a pretty firm understanding of the business from top to bottom and I launched a blog for that industry that eventually became known as deBanked. In 2012, I launched a complementary online community called DailyFunder for people in that same industry to communicate with each other.

The timing worked out well because the rise of “fintech” propelled the industry as a whole forward and my sites became the dominant independent sources for information about small business finance. Today, deBanked is one of most well-known publishers in the small business finance industry and our products include massive conferences and networking events which take place around the United States each year. I have five full-time in-office employees and that’s the business that I manage and operate day-to-day.

CryptoReporter.eth: When was your first experience with crypto?

Sean Murray: I first heard about bitcoin in 2013, before “crypto” had entered the common lexicon to describe it. I finally recognized its potential in 2014 and dove into it.

I mined bitcoin, ran a node, used it to pay for things, went to bitcoin meetups at the original bitcoin center in NYC, and inked what was probably one of the first advertising contracts priced strictly in bitcoin with no dollar peg. That was back in January 2015 if you can believe it. Neither of us were crypto-related companies so I think the moment was pretty significant.

I did write several articles about Bitcoin in 2014 and 2015 but the audience we wrote for at the time did not have any interest in the subject so it was relegated to being a personal interest instead of a business one. In 2017, however, the ICO surge rekindled public interest in crypto and I conducted an extraordinary amount of research on Ethereum, tokens, and NFTs etc. For a short while, I ran an Ethereum node.

Throughout all of this experience, I never considered crypto to be an “investment” and I have never bought crypto with the hope that it would go up in value. For me it’s exactly like going to the ATM. I don’t get fiat from the ATM and hope my dollars go up in value. So naturally, whenever I have acquired crypto, it was always with a specific utilitarian purpose or transaction in mind.

In the Fall of 2021, I was a participant in the ConstitutionDAO and in the top 5% of contributors by dollar value. I ended up in a story for The New Yorker because I stood outside of Sotheby’s dressed in a revolutionary soldier costume on the day the Constitution auction took place while holding up a DAO sign and livestreaming my thoughts about it on twitter.

CryptoReporter.eth:  Around what time did you learn about ENS?

Sean Murray: Around that same time in the late Fall of 2021, I managed to stitch together my own Ethereum smart contract and deployed it on the mainnet where I have used it ever since to mint my favorite thing, NFT photos of myself, lol.

As I began to transact in Ethereum more regularly, the stress of copying long random wallet strings to move money became really frustrating. As far as I remember, that’s how I first discovered ENS and I thought it was an incredibly obvious and super useful utility.

Unfortunately, as many people well know, my first attempt to register a name failed because someone had already registered debanked.eth, a name I’ve had trademarked for many years. Eventually, I registered my name, seanmurray.eth, as an alternative. I then registered a few other trademarks that I own before anyone else could and that piqued my interest in how broad the usecase for an ENS name was or could be.

CryptoReporter.eth: What does Digital Identity mean to you and why is it an important concept to understand?

I was among the first people to join Facebook in 2004 when it was only open to students at select universities. As I got older, I started to view my Facebook account as a  journal or diary of my life.

I’ve been on it for 18 years now so it’s fair to say it’s actually become that. And so I was excited by the idea of growing old and looking back at it or future generations being able to peruse it to trace my experiences. The flaw in that thought process is that Facebook eventually became less popular and the engagement I get on it has plummeted.

It doesn’t really perform the same function for me anymore. That led me to ponder the possibility of moving all that I had recorded in the way it was recorded to whatever the next platform would be and I realized the system is not exactly set up to do that. Yes, I can locally download my Facebook content as a zip file but it just becomes a giant clump of stuff. And so my life story is basically stuck on Facebook with no easy way to transfer it. I can’t even transfer my username.

I have a different username on every single social network because someone has taken my preferred one. So here I am, a grown adult, almost 40 now, thinking I had so much figured out, and I’ve realized that I’m not really in control of my own life story and that I’ve surrendered it all to these social networks who get to decide who I am and what’s there.

What would have made much more sense from the start was to have a cross-platform compatible username that nobody else could take and to have all my social media content owned by some type of tech that I control. That tech didn’t exist before but it does now. Many know it as Web3. Perhaps, I thought, there is still time to course correct.

I could be seanmurray.eth and all my photos and videos could be NFTs owned by a wallet that I control. Then I could just plug it in and out of any platform I want. That’s what digital identity is to me and that’s one of the primary use cases for ENS in my opinion.

CryptoReporter.eth: In your opinion what are the misconceptions that most people have about ENS and DNS?

Sean Murray: There are a lot of misconceptions about ENS and DNS. First, I believe that anyone pursuing an investment strategy that involves acquiring ENS names absolutely must experiment with importing a DNS name into ENS.

This is basic due diligence and research on the ecosystem. Here’s a simple thing to remember.  While .eth name is an ENS name, not all ENS names end in .eth.  A .eth is just the native naming system of ENS. Importing a DNS name like abc.com does not turn it into an abc.eth automatically, it remains as abc.com but becomes equipped with almost all of the ENS capabilities, including serving as a username, wallet, identity, etc. Abc.com and abc.eth would be two completely independent names in the ENS universe.

Another misconception is that DNS and ENS are competitors. It’s quite the opposite, ENS makes DNS names significantly more valuable by upgrading their capabilities. From there, it’s about personal preference. DNS is centralized and natively tooled to run websites and email addresses. ENS is decentralized and natively tooled to elude third-party control.

CryptoReporter.eth: Can you explain why a company may integrate ENS to their DNS?

The world has not woken up to it yet. Any business running a website, can, with the stroke of a smart contract transaction, give its users crypto wallet capabilities and cross-platform compatible identities with virtually no work required.

DNS is also natively tooled to be websites and this works fantastically with the ENS subdomain system.

Sure, none of this is decentralized, but a business may view this as a positive.

If someone hacks the crypto wallet connected to the debanked.com ENS name, they can’t steal the name or burn it. The DNS owner retains control over the ENS name. The downside is that the domain registrar, ICANN, or the authorities could override that control.

July set the record for most DNS domains imported to ENS in a month through 100 transactions conducted via the import contract.

CryptroReporter.eth: Is there anything of importance you believe the ENS community should know?

Sean Murray: As of right now, virtually no business is aware of DNS->ENS and I suspect this is by design because many people within the ENS ecosystem assume that DNS->ENS threatens their portfolio of .eth names so they don’t want anyone to know.

However, the opposite is probably true. Once a business upgrades its DNS name to get ENS capabilities, it will naturally have to seek out the .eth counterpart so as to avoid confusion in the ecosystem. I actually think that the ENS community should lead with DNS->ENS integration in its pitch to businesses and brands. Adoption of the .eth naming system would automatically follow.