A Comparison Of The Two Most Popular Web3 Domain Platforms

by PhoenixxDown.eth
in Culture
Reading Time: 7 mins read
1 0
A A
Donate
0

Two of the most popular platforms for creating and managing decentralized domains are Ethereum Name Service (ENS) and Unstoppable Domains (UD).

Both platforms offer unique features and advantages, but they also have some key differences. In this article, we will take a closer look at the two heavyweights, comparing and contrasting some of their use cases, characteristics & features, costs & pricing, organizational structure, and overall sentiment within the culture of Web3.

The question of which is the better option is an old-age debate among domainers…..let’s see if this settles things once and for all! 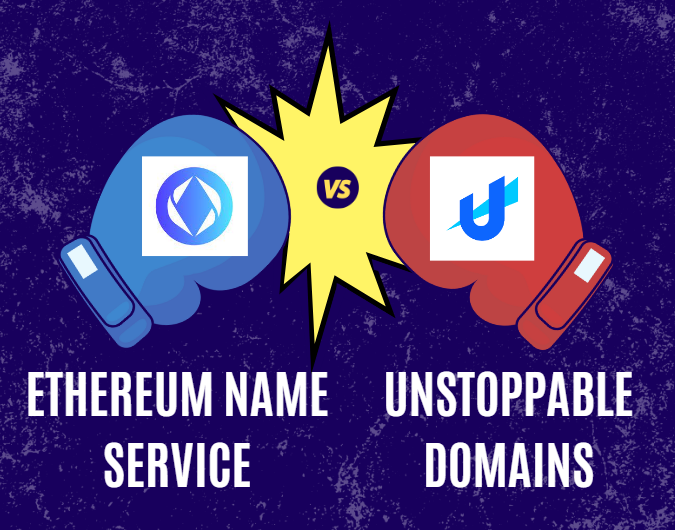 ENS and Unstoppable Domains have vastly different pricing models when it comes to registering domains.

With ENS, the cost will entirely depend on the length of characters your domain has:

Users need to renew the registration period on their domains in order to maintain ownership of them. If the domain owner fails to renew, they have a 3-month grace period to do so. If they let it expire past this grace period, the domain will become available on the public market and enter a Dutch auction phase.

On the other hand, Unstoppable Domains (UD) is relatively more straightforward when it comes to registration. Once a buyer purchases a domain, it is theirs to keep forever with no further costs required. With that said, the pricing structure is not so simple. It shares a similar structure with ENS where the shorter domains come at a higher cost – but Unstoppable has eight tiers of payment, as opposed to ENS’s three.

The issue with this 8-tier structure isn’t the total itself, but rather the convoluted parameters that define each one. Take for example Tier 4 of an Unstoppable Domain, explained as: ‘four-character domains + five-character domains containing common dictionary words or word combinations”

It’s not the easiest of definitions to digest, especially when compared to ENS’s much simpler 3 bullet point setup.

Unstoppable Domains has no renewal fees, a significant benefit at first glance. However, that comes with its own pitfalls. If a buyer who snaps up a .x or .crypto domain loses the keys to their wallet, that domain is conceivably lost forever as it can never expire and thus return to circulation. Certainly, if the owner dies, essentially that domain dies with them.

Lovers and supporters of ENS will always champion the decentralized nature in which it operates.

It is an open-source project, publicly available for all to use and build upon, and governed by a DAO – a Decentralized Autonomous Organization. The rules and decisions of ENS are governed by its members, rather than any central authority. Decisions for the future of ENS take place via voting. This promotes collaboration and transparency, as all votes are recorded on the blockchain for anyone to see: Constitution.ENS.Domains

Despite being a San Francisco-based registered tech company, Unstoppable Domains describe itself as decentralized. To be precise, they say the following:

Except, Unstoppable Domains ran into a huge problem in October of 2022. They announced the discontinuation of their .coin domain due to a ‘potential collision’ with Emercoin’s .coin domain.

Important: We became aware of a potential collision with .coin and have decided to stop supporting .coin domains. We’re offering .coin domain owners credit of 3x what they paid.

🧵👇 Here’s everything you need to know: https://t.co/K1ogGk2IZv

This is a massive issue on a number of levels:

In light of this, ENS wins this round very comfortably.

For both ENS and UD, the most common function is to replace your long, messy wallet address with a human-readable, easily identifiable name.

Unstoppable Domains offer a nice feature for those new to Web3 via web-building tools and templates. This allows domainers to build and host their own website for free and with relative ease.

UD has also launched ‘Unstoppable Email’, a privacy-driven solution to email communications to keep your identity hidden. Domain owners can connect their @ud.me email address to their personal email address, with the resulting effect being that recipients of emails from that mailbox will only ever see the sender as ‘example@ud.me’

Those are useful tools, however, they are features that have been built and offered by the team at Unstoppable Domains.

Unlike UD, ENS offers an avenue for innovation, accessible to anyone with an idea to come and freely contribute to the ecosystem.

One example is Balaji’s idea, for ENS as an “encrypted and censorship-resistant messaging”, using ENS protocol, instead of SMTP protocol.

Balaji goes on to say, if you have the “.eth names for all your followers, you may be able to send them end-to-end encrypted messages that no intermediary can censor”.

Email lists are good
ENS lists will be better

ENS or something like it could provide encrypted and censorship-resistant messaging.

If you have .eth names for all your followers, you may be able to send them end-to-end encrypted messages that no intermediary can censor.

Another example of innovation is ‘Sign-In With Ethereum’ (SIWE), a way for users to authenticate themselves on a website or application using their Ethereum wallet.

This is a far more secure method than using a password or a 4-digit pin number.

A third proof of concept is from Hideyoshi Moriya, who used an NFT from ENS to open their front door.

The system checks if the user has the specific NFT in their digital wallet. If they do, the door unlocks. If not, the door stays locked.

My home also can be unlocked with Ethereum, by verifying a NFT (ENS) ownership.
In this example, the system verifies if I have an ownership of piyo.eth @ensdomains. pic.twitter.com/3umA2F0EwR

Another highly anticipated development is the ENS Name Wrapper. While subdomains can be created on ENS, they are not created as separate NFTs and cannot be sold, rented or transferred between wallets.

The Name Wrapper will enable businesses and individuals to use subdomains for payments and accounting, along with the ability to rent and sell subdomains. This could be a massive catalyst for mainstream adoption.

Additionally, some prominent projects built within the ENS ecosystem are featured in this typically exceptional thread by Web3Domain’s writer dr3a.eth:

Founder of Heavens Tools and active ENS builder, Dylan Meador (satoshi.testaccount.eth), is a fine example of the type of person creatively involved in building out the ENS ecosystem and beyond. Check out this great interview where he speaks on his vision for ENS and how he is trying to help everyone build something in the Web3 space.

ENS is the winner by the method of KO when it comes to popularity within the culture of NFTs and Web3. As of October 2022, there were over 139,000 Twitter accounts that included a .eth mention in their profile name.

According to .eth Leaderboard, the top 10 accounts with a .eth possess more than 1.7 million followers. This includes support from famous people and corporations such as Trey Songz, Puma, Anthony Hopkins, and Vitalik Buterin. Meanwhile, mentions of .crypto, .nft, and even .x for Unstoppable Domains on social media are near non-existent.

In terms of financial numbers and sales volume, the market has spoken as well. ENS dominates the all-time sales volume in the Domain Names category, with 77,000 ETH being traded on Opensea alone. Decentraland Names are the closest competitor with 806 ETH traded, and Unstoppable Domains trailing behind in 4th place with only 403 ETH in sales.

Unstoppable Domains does have some good attributes going for it, namely the website and email tools. However, these components are overshadowed by the sheer depth of attention given to ENS by its users.

Largely, the talented builders who flock to ENS are decentralization aficionados, and being unable to build on top of Unstoppable Domains poses a problem for those with an appetite for creation.

Even if one isn’t a builder creating something, most Web3 supporters are far more inclined to be drawn to and trust a decentralized entity rather than one which is run by a company.

The future looks bright for ENS, with it even being proven as a recent ‘flight to a quality asset”, alongside art.

Time will tell if ENS will hold on to its crown, or if an unknown challenger is yet to rise through the ranks to become the new number-one contender!

PhoenixxDown is a web3 enthusiast and investor, predominantly with an interest in NFTs and ENS technology. Phoenixx has been an avid writer since as long as he can remember, venturing into all forms of literacy expression from writing screenplays, to composing marketing copy for large brands, and most recently, information based articles for web3. He lives in London, and when not complaining about the weather, enjoys horse racing, saunas and raising his family.