by CryptoReporter.eth
in Interviews
Reading Time: 6 mins read
1 0
A A
Donate
0

Chris is a professor at the Columbia Business School and the creator of Console Dao, creating a safe & secure “instant messaging” Web3 chat platform.

The following is my Interview with Chris.

Can you tell us a little bit about yourself?
Yes, so my name is Chris but everybody calls me Castig.

My last company was One Month which went through Y Combinator. The mission was to teach people how to code in 30 days. I started with my cofounder Mattan Griffel.

I am also a professor at Columbia University Business school where I teach a course called digital literacy,  which is an MBA course that students take so that they can basically understand how to start a startup, and how to run project management. We apply these concepts to both Web2 and Web3 concepts, so we love to talk a lot about decentralization and blockchain. Before that, I was a developer myself for 7-8 years.

When was the first time you heard about crypto, and most importantly when did you begin to research it yourself?

I learned about Bitcoin in 2013-2014. That was when I was with One Month and we went to California. When you go to Y Combinator it’s required you live in Silicon Valley. We went out there for 3 or 4 months and that was the year after Coinbase had gone through YCombinator.

People in the batch were using Bitcoin for various things. Mostly, it was just fun to send to people. It was around the time that MT. Gox crashed and Coinbase wasn’t as big at the time so people were using different exchanges.

I was really interested in decentralization ever since learning about it through peer-to-peer file-sharing software like Napster and BitTorrent. Back in the day, we could use a program called Oink. Basically, it was a place that anyone could access to download albums.

We would host albums, and if people downloaded them from us, we would get oink points. Music cost oink points and you had to mine in a way (we called it seeding), to get them. So when I saw Bitcoin a couple of years later I realized it was the same concept, but for money. It just clicked in my head.

What are your thoughts on the current players in Web3?

What is the vision for your company?

So Console is Web3 Chat platform, secure and more private than Discord. The vision is to be a home, a safe place for decentralized communities to grow, focus, and take action. I imagine these communities having a lot of power when people come together and have a particular vision for the future. 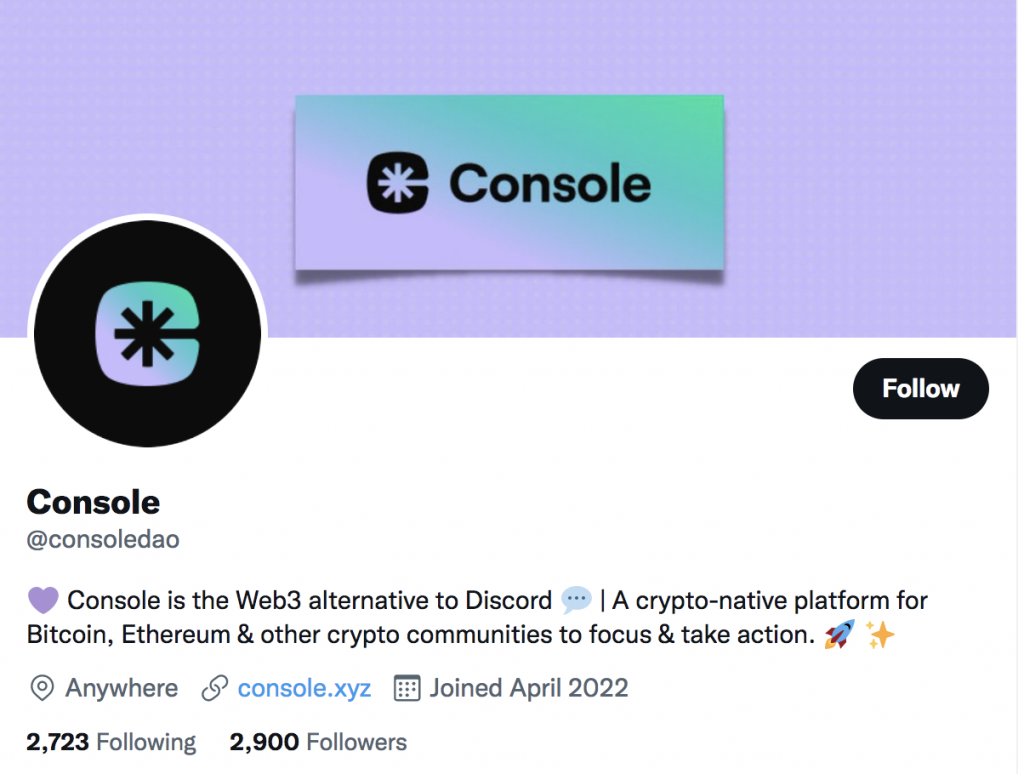 For example, I think we saw that play out with Wall Street bets, the power of a swarm of people sharing a particular goal. I think we also see that with the rise of Bitcoin. The fact that people all around the world agreed to revolutionize the financial system without even knowing the founder is amazing to me.  I think these decentralized communities can be really powerful.

You could say that in this day and age that money has become information. We may have thought that was true for two decades or since PayPal. But money was always owned by companies or governments and we used it. Now I think people understand what it means to own money. I think that’s a very important paradigm shift in people’s view of the world. The next step is for people to learn that you can own your identity and that’s really important.

People will realize that identity becomes information. We may think we own our identity right now, but I think the same way we had questions about money, comes to the questions about identity. Coming back to Console, I think we are a way for people to use those identities and ways that people don’t even know yet.

What does digital identity mean to you and why is it an important concept to understand?

In the world right now, we have our identity and that means a lot of things. It’s psychology: we each have our own egos. You see people online, mostly on Twitter changing their names to .eth, .btc, or .sol, and in some sense, it’s like shifting to tribalism. People are seeing themselves as more than just their handle.

There’s an opportunity as we move from our real-world lives into the digital to be more deliberate about owning our identity. Right now, we give that power up to a great degree to these Web2 companies.

I think this is a pretty familiar narrative, but if you have an identity on Twitter, you don’t own that identity and because of that, you can’t port it to other places around the internet. My Twitter identity is only my Twitter identity. My Airbnb identity has a certain cache, reviews, and things about it, but that’s all guarded by Airbnb. Those identity markers are owned by this one company.

Because of that to a large degree, they can control my identity, they can boot me off the platform, can censor my data, and I don’t have too much to say about the future of the platform. I think this transformation of identity, as identity becomes information, gives us a sense of ownership, not only of our data but gives us more agency over the tools and the tools we are creating.

When you hear the term the Metaverse, what does the concept mean to you?

The metaverse is not my real focus if I am being honest. In my opinion, the Metaverse already happened, and it’s called cyberspace. If you look at what people called cyberspace in the early 90s was very similar. It was a very powerful concept about a place where there was no prejudice based on who you were or how you looked.

I think there’s a certain utopia in sci-fi and that’s where the term cyberspace came from. (William Gibson’s’ Neuromancer). Both terms are very idealistic sci-fi visions, but I think the values are the most important and that is what will survive.

How are you using ENS for Usernames?

With Console, I sign on MetaMask wallet. So for example I am castig.eth.  We also support .btc addresses and eventually .sol addresses. Other decentralized addresses will come in time, but our main focus right now is on .eth and on .btc.

Do you plan on using subdomains?

Not at the current moment, but we might potentially use subdomains as directories in the future.

Do you see potential airdrops in the future?

I see the potential for airdrops, but don’t have any currently planned. I see airdrops as an incentive but have to ask what is the bigger impact of it. I think the airdrop of random NFTs just for the sake of it is less interesting, as opposed to the ENS token airdrop that happened.

I was lucky to be a part of that for purchasing my ENS name really early. I think it’s pretty cool that a project can build up, get a lot of momentum and then turn over ownership and governance to the people actually using it. All of a sudden you can share ownership with the people. That concept is so powerful.

For better or worse, I think it’s an interesting future to imagine and to see how people will pool large amounts of money, resources, or actions, and collectively become a part of something that we are just beginning to see.

Airdrops will definitely be a big part of that.

How are you separating yourself from the competition?

I think the fact that we are using decentralized identities is really big. We really want to partner with and support ENS and the community because it’s really important what they are doing. With sites like Discord, they go through a bot and then the blockchain, but on Console, we go directly through the blockchain.

With the three-step process, the bot becomes the man in the middle that usually gets attacked, whereas our platform doesn’t rely on a bot but on the blockchain itself.

I think that decentralized identity is a very big part of that and people aren’t doing it in a safe and secure way. I predict that the next few years are going to be interesting, especially as the competition heats up and the space evolves.